It’s time for another Good Idea, Bad Idea (anyone remember those snips from Animaniacs back in the 90s?)!

Scripting your auto emails to personalize them and make them more likely to be read.

Placing your script in a string literal, preventing it from executing and emailing the script text instead. This is an email I received earlier today.

The feature is nice; it’s supposed to change to the subject line based on the number of people in your queue and assign either

Sadly, I got neither.

Historically, web designers have been limited to the fonts they can use in live text. Enter Google Web fonts. This will allow you to integrate any website.

I have used the Google Web Fonts API to integrate the Jura font for this post by adding the following to my HTML:

You can view more font options on the Google Web Fonts site.

Why did I choose this font? I wanted to use something that was easily differentiable from the surrounding content. 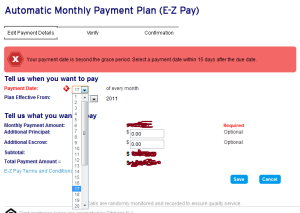 Recently I was on the CitiMortgage website (www.citimortgage.com) and noticed a poor design decision in the date selector. The company policy prevents you from picking a date past the 16th of the month. The drop down list to select a date, however, presents the user with all date of the current month but will show an error message if the user selects any date past the 16th. Why even present the user with those options?